Commercial Pilot Salary How Much do Airline Pilots Make?

Flying can be a very rewarding career, both financially and in terms of job satisfaction. Pilots undertake intensive training to develop a highly unique skill set. As a result, commercial pilots are paid well.

According to The Occupational Outlook Handbook, the Bureau of Labor Statistics, states that “The median annual wage for commercial pilots was $82,240 in May 2018”. In addition to annual earnings, pilots take part in company health insurance, life insurance and retirement plans. In many cases, these plans exceed what employees in other fields receive.

Airline pilot salary varies and can range anywhere from $28,000 per year to several hundred thousand per year depending on:

How to Become a Commercial Airline Pilot » Request More Info »

What can Airline Pilots Plan to Actually Earn? How Much do Pilots Make a Year?

Pilots are hourly employees and are paid by flight hour. Due to the constraints placed on pilots by the FAA, most fly about 85 hours per month. There are more work hours involved, such as preflight planning, but time in the cockpit, and thus the pay, is usually about 85 hours monthly. In addition to flight time, pilots are also paid per diem, which serves to reimburse pilots for the food and beverage expenses that they incur on the road. For this discussion, add in $4,000 per year to every annual salary to reflect per diem.

The Bureau of Labor Statistics reports the range of salaries for airline pilots, copilots, and flight engineers from less than $65,690 a year, to the highest 10 percent earning more than $208,000. However, these numbers only give us a glimpse of how much a pilot earns and how those earnings change over a career.

Major airlines consist of well-known names, such as American Airlines, Delta and United, along with the cargo carriers FedEx and UPS. Pilots work many years to get hired by a major airline and almost never leave one to work at another. Pilots at the major airlines enjoy strong salaries and good benefits.

New hire pilots at American Airlines have the potential to earn $95,800 their first year of employment. From there the pay can vary depending upon what aircraft the pilot flies, but most sixth-year first officers at American are earning at least $180,460. While a twelfth-year first officer can easily make more than $200,000 a year if they pick up a few extra hours here and there.

The payoff in aviation comes when one becomes a captain for a major airline.

With union protections and seniority system, job security and guaranteed earnings, advancement at the established airlines are excellent. With the annual earnings of senior captains around $300,000, some pilots can expect a seven million dollar career in total earnings, illustrated below according to the typical career progression. 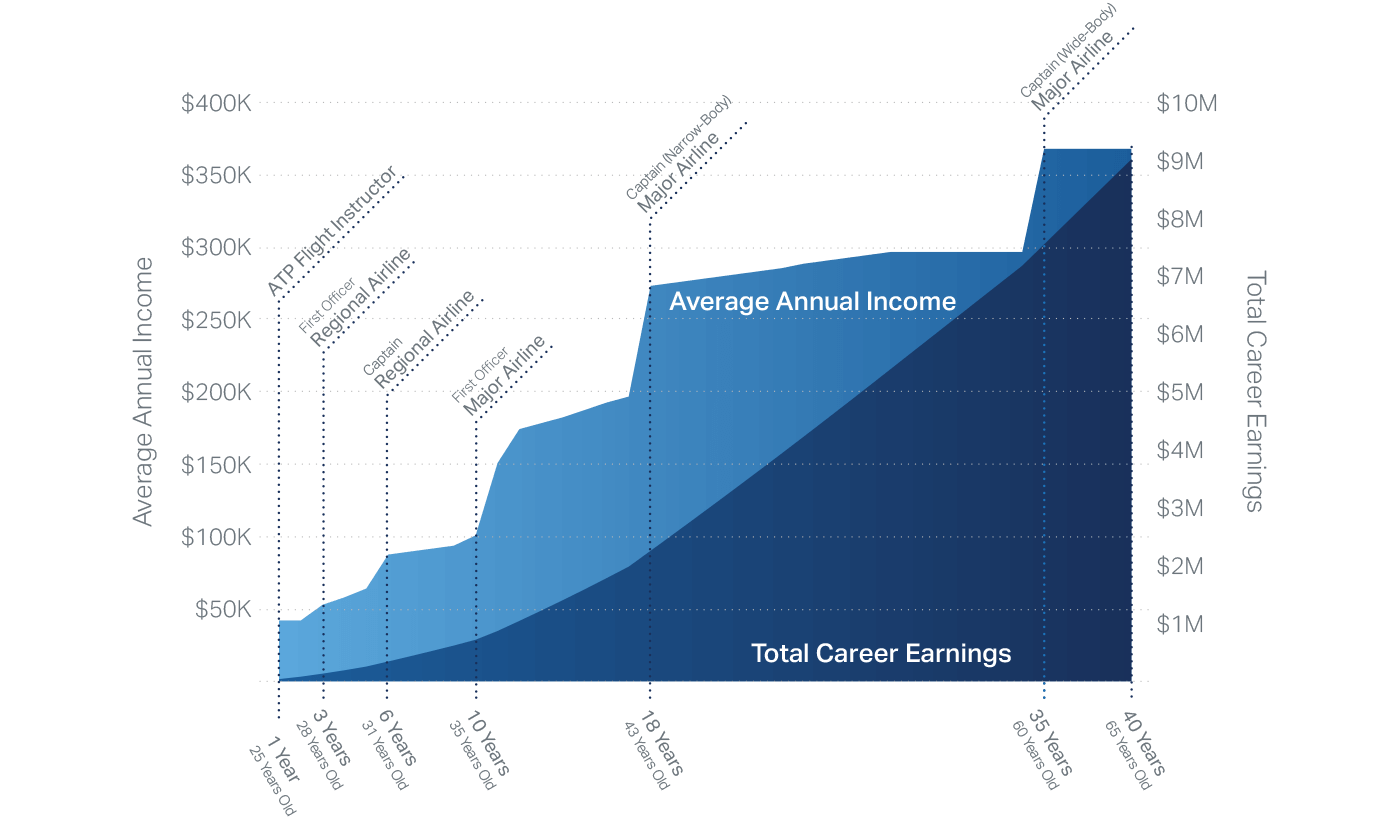 You can become an airline pilot. Here is everything you need to know about becoming a commercial pilot starting with no previous experience.

The steps required to become a commercial pilot »

Commercial Airline Pilot Career Seniority & What it Means to You

What Airline Senority Means to You » Request More Info »

Summary of educational, medical, legal, certification and qualification requirements to become a commercial pilot and fly for major and regional airlines.

What are the eligibility requirements for becoming an airline pilot? »
How do I become a pilot?

You can become a pilot. Learn how to become a pilot and get your pilot license, including requirements, eligibility, how long it takes, and cost.

Enroll in accelerated flight training with ATP and go from zero experience to a commercial airline pilot, with 1500 hours, in about 2 years. Learn how you can become an airline pilot with ATP Flight School.

How long does it take to become a commercial airline pilot? »
What is airline seniority?

Airlines operate on a seniority-based system. Learn what this means for your career and why getting to the airlines first is important.

Airline seniority explained »
What is a regional airline pilots' salary?

The shortage of pilots qualified to fly for the airlines is causing regional airlines to offer signing bonuses, tuition reimbursement, and other incentives. Learn more about how much you will earn as a pilot.

Compare First-Year Pay at Each Regional Airline »
How much does it cost to become a commercial pilot?

ATP provides up-front, fixed-cost pricing in a way that differentiates us from most other flight schools and academies. With over 30 years of experience, ATP designs our flight training programs with enough flight time for the vast majority of students to be successful.

How much does it cost to become a commercial pilot? »
What pilot training programs are available?

What pilot training programs are available? »
What is a commercial pilot license?

Learn all about a commercial pilot license, including privileges, requirements, eligibilty, and how to earn this pilot license.

What is a commercial pilot license? »
View All FAQs » Request More Info »