Never Give Up. It Can Be Done

For as long as I can remember, I have heard people use "living the dream" in a joking manner. As a first-generation immigrant to the United States, the term was something I respected and focused on consistently. I've always been conscious that moving to the United States was a privilege afforded me and my family through the lottery system in the late '90s. Growing up in New York City taught me to pursue my dreams and to never give up on my ultimate goals in life.

Throughout my training and professional life, I've heard many inspiring stories from aviator colleagues. Their stories must not be forgotten, and should be shared to truly understand what "living the dream" means for them. One of the more inspiring and memorable stories belongs to a colleague of mine, Michael Sikoutris. 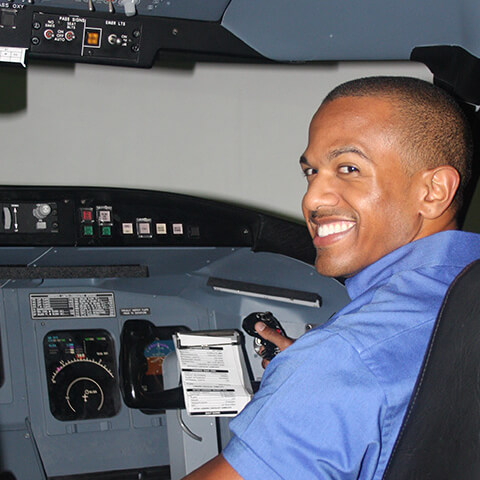 Michael is a second-generation immigrant to the U.S. and he has been passionate about aviation since he was a little kid living in Brooklyn, N.Y. While growing up, his family was extremely supportive and his dad used to take him plane-spotting near the approach paths of LaGuardia and Kennedy airports. Michael says he even looked for cheap tickets so that he could go on round-trips within a day between Florida and New York to experience what it's like to be on an airplane. He was the first aspiring pilot in his family which left him unaware of the path to fulfill his dream.

One of the most memorable days for Michael was during an assembly in his junior high school when some Tuskegee Airmen spoke to the students. It was the first time he had seen someone with his skin color who had become an aviator and held such an honorable position. That day, Michael knew that he wanted to become an airline pilot.

September 11th, 2001 shattered the dreams for Michael in the most unimaginable way. His cousin was aboard American Airlines Flight 77, which struck the Pentagon. His goal of becoming an airline pilot became seemingly impossible owed to waning support from family members spurred by the loss of his cousin. He wanted to attend an aviation university, but instead enrolled in CUNY Hunter College, earning a bachelor's degree in physics and mathematics. Michael chose to study physics because he knew the subject matter would bring him closer to his true aspiration.

After graduation, the city of New York granted Michael a scholarship to attend graduate school in physics provided he become a high school teacher in its public-school system. At the age of 21, he decided that he could not pass on the opportunity. Michael taught physics at Brooklyn Technical High School and worked toward his graduate degree from Pace University.

One day during one of his classes in the high school, Michael had a discussion with his students about what they wanted to do with their lives. Little did he know, that his students would ask him if he had always wanted to be a physics teacher. He shared with them his true passion, love, desire, and ultimate dream. Michael was inspired by his students and after three years of teaching, he packed his bags, and left to attend ATP Flight School in Florida.

Having zero flight experience, Michael earned all his certificates and flight ratings in just seven months from ATP's Airline Career Pilot Program. He worked tirelessly as a flight instructor for nearly 13 months to accumulate more than 1000 flight hours so that he could apply to and work as an airline pilot. ATP's fast paced environment prepared him for the airline jet training. He flew his first flight in a single-engine Piper Archer in September 2014, and flew his first commercial airline flight in the Embraer 170/175 for Republic Airways, just two years later, in October 2016.

Michael Sikoutris said of his path, "This journey has shown my extraordinary capabilities, determined character and perseverance through many struggles. There were plenty of people who did not want to see me succeed, especially during the final stages of my airline jet training. My drive and continued faith made for such a rewarding outcome. I love what I do and I would hope I am a person many look up to and know 'it can be done,' just as my students looked to me as a role model."